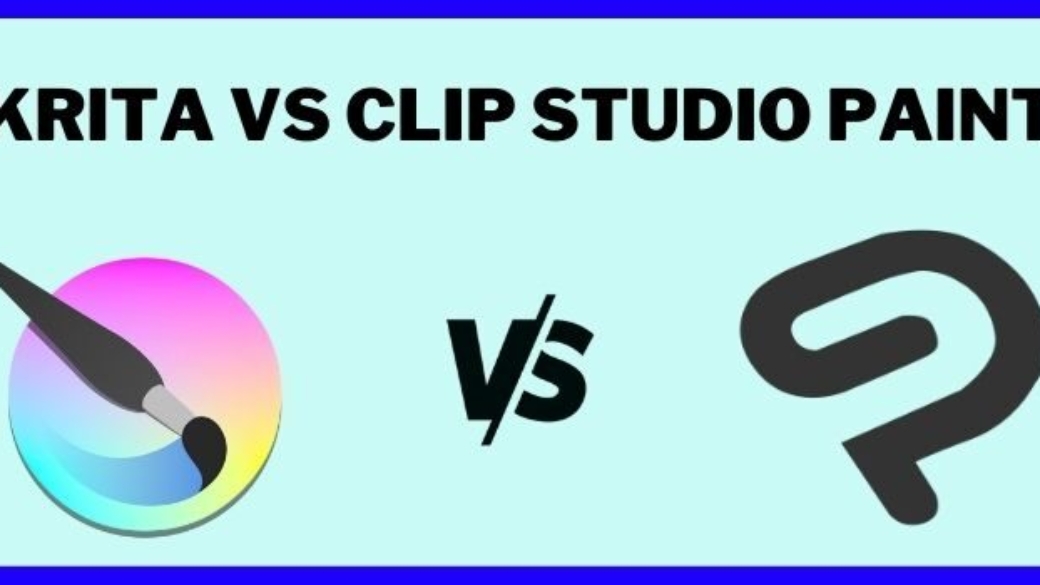 Many of the creators are perplexed while searching for the best digital painting software. And selecting the best becomes more complicated when you need to find the best between paid and free software. Here you will get familiar with the difference between Krita Vs Clip Studio Paint. But before heading toward the comparison between Clip Studio Paint and Krita, let’s have a look at their background and features.

In the race of free digital art software, Krita is one of the most prevalent names. It is a free-to-use Open source software, which was created by a group of artists, to provide free painting software. So that everyone could use it despite their pocket capabilities.

Krita allows you to create a wide range of paintings, such as illustrations, comics, matte paintings, concept art, textures, etc. It is also considered one of the best graphic design software. The most important features of Krita which make it an amazing software are mentioned below.

Clip Studio Paint is a widely used software for the creation of illustrations, comics, animation as well as Manga art. It is quite popular among the professionals who use it for animations such as cartoons, character art, etc. It is also considered among widely used comic software. One of its best features is that it helps the artist to draw 3D images and do 3D modeling. Its major advantages of Clip Studio Paint are:

Thus we have seen that both Clip Studio Paint, as well as Krita, come with a variety of features and tools that make them great apps. But still, in order to decide for you which app is the better app, we need to make a little comparison of Clip Studio Paint vs Krita. So, let’s deep dive into their comparison to find the major differences between them.

There are lots of differences that a user may find between the Krita and Clip Studio Paint. The major ones out of them are:

The biggest difference between Krita vs Clip Studio Paint, that the former is free software whereas the latter is a paid one.

Krita is open-source software that is free to use for anyone. Due to this, it is also considered as one of the best free alternatives to Clip Studio Paint. Whereas CSP is a paid software, which comes at a price of $49.99 as a one-time purchase. Although, the price of Clip studio paint is also reasonable as it is a one-time purchase and comes packed with features, yet as compared to Krita, it is a less likely software in this regard. On the special events, Clip Studio Paint goes on CSP sale and reduces half the cost of the software. You can apply for a discount by using the Clip Studio Paint coupon code.

The major point of difference in the usability of Krita as well as Clip studio paint is that the latter is more preferable by the professionals.

This is because, Krita only supports 2D animations and paintings, whereas Clip Studio Paint also supports 3D paintings and modeling of 3D objects. This way, it is one step ahead of Krita in usability.

On What Devices Can You Use Krita Vs Clip Studio Paint?

Krita is compatible with a number of Operating systems such as Windows OS, Mac OS, Linux, Chrome OS as well as android. However, it is not supported by iOS till date.

Clip Studio Paint on the other hand comes with support in Windows OS, Mac OS, Android OS, Chrome OS as well as iOS and iPad OS. It does not have support for Linux OS.

So, both Krita vs Clip Studio Paint can work on almost the same kinds of devices.

Clip Studio Paint Vs Krita, Which One Is Easier To Use?

Krita is a very easy-to-use software, which was developed by professional artists for every layman to use. Although, it comes with only two languages, which are- English and Japanese.

On the contrary, Clip studio paint comes in 7 different languages to make it easy for a wide population to use. It is also an easy-to-use software, which comes with in-built features so that the efforts of the artists are reduced.

Krita comes with a toolbox docker with a large variety of in-built tools such as calligraphy tool, freehand brush tool, pattern editing tool, and straight-line tool Gradient editing tool, etc. which make it quite user-friendly.

Clip Studio Paint on the other hand comes with many tools such as the Marquee tool, auto-selection tool, eyedropper tool, move layer tool, operation tool, etc. which help the artists in doing all paint-related things quite easily.

Thus we have read about the features as well as the main points of comparison between Krita and Clip Studio Paint. However, they are similar in the way that both of them are based in Japan. The major difference comes in their price as well as the availability of 3D modeling tools.

However, on the basis of your requirements, you can select the best option for yourself.